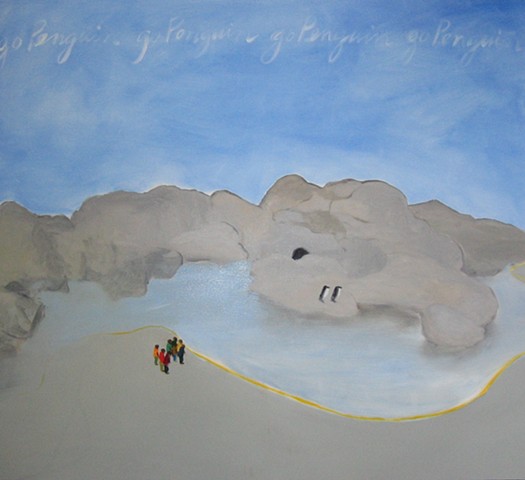 “When I was ten, I used to go to sleep by repeating out loud all of the conversations from that day, word for word (or as close as I could remember). This somehow relaxed me. It appears not much has changed.” Sean Bayliss makes paintings into which verbal language intrudes quietly, sometimes invisibly, but always insistently, as if the pictures were talking or writing to themselves. The words he uses are drawn from overheard asides and friends’ stories, or function as names for situations. They may suggest explanatory captions or narrative speech bubbles, but never comfortably fulfill the demands of either form. They have an intimate relation to the images they accompany, but one that tends not to be immediately clear.

The interpretive uncertainty that this disjunction between image and text engenders is Bayliss’s bread and butter. He relishes the confusion that results when—as happens all the time—what is said, what is meant, and what is understood by a given phrase fail to fully coincide. “Structures for making money, exerting power, or claiming superiority can be thinly veiled as reasons for talking,” he writes, “yet the veil is there for some reason.” But rather than an attempt at pinpointing that reason, what Bayliss’s project represents is a subjective exploration of the circumstances that surround it. His paintings are studies in the incidental, the overlooked, the seemingly contradictory. They are paeans to everyday strangeness and the ways in which isolated moments and fragments can stand for or stand out from a whole.

“You can live in the countryside, and still work in an office park. You don’t love it, but a lot of people would kill for that job. Or that’s what they tell you.” Bayliss’s commentary on his painting good job (here, as in many of his newer works, the phrase features only in the form of a title) is typical of the wry wit that distinguishes his choices of subject and composition. The canvas depicts a tiny generic building standing alone in the center of a featureless expanse of pale (snowy?) ground. The sky, which occupies two-thirds of the space, is a cloudy swirl of blues, greens, and pinks. Presumably, what we are looking at is the coveted country house, but the structure’s absurdly isolated setting seems to reflect workaday alienation as much it does rural tranquility.

But even when his themes tend toward the dark, Bayliss always aims for beauty. His palette is light, even sweet, and his surfaces display a gentle touch. His work beckons, appears entirely friendly, but carries an element of risk. Like the slender ladder that leads to a blank panel in billboard access, it offers a route to meanings that are necessarily, tantalizingly, incomplete. —Michael Wilson